The Rocky Mountaineer operates from mid April to mid October in 2023. For specific departure dates, continue reading or look at specific train trip packages for exact start dates.
For most routes the train departs twice each week. Periodically there are three weekly departures from Vancouver to Banff and Lake Louise and from Lake Louise and Banff to Vancouver.
PLEASE NOTE: Dates listed below refer to the date the train departs. All packages that include a hotel night before the train departs will begin one day earlier to account for the night at a hotel.

The Rocky Mountaineer departs Vancouver for Banff and Lake Louise each  Monday and Friday beginning on April 17, 2023 and ending October 13, 2023. The train also departs Tuesdays from May 9 – May 30, 2023 and from July 4-September 26, 2023.
In October there are four departures from Vancouver to Banff and Lake Louise; The last train of the season departs October 13, 2023.

In October, the train departs Banff and Lake Louise for Vancouver on October 1, 4, 8, 11, 15, 2023. October 15th is the last westbound (Banff or Lake Louise to Vancouver) train of the season.

The train does not begin or end in Calgary. It begins or ends in Banff or Lake Louise. Transfers are available between Banff/Lake Louise and Calgary airport or downtown Calgary.

Vancouver to Jasper Via Whistler Departures

Here are the arrival and departure times for our trains.

FIRST PASSAGE TO THE WEST

JOURNEY THROUGH THE CLOUDS

*On this rail day, the train will arrive/depart from the Pemberton platform, with a complimentary transfer to/from your Whistler accommodation.

ROCKIES TO THE RED ROCKS

At the end of your rail journey

Depending on the rail route and direction in which you travel, arrival in your destination ranges from afternoon to early evening. Rail travel in North America is occasionally subject to unforeseen delays. While Rocky Mountaineer is treated as a priority on the train tracks it uses, occasional delays do occur. For that reason, please book accommodation in your arrival destination at the end of your journey, and do not arrange connecting transportation, including flights, on this day. Rocky Mountaineer can arrange for airport transfers, additional hotel nights, and tour options at the start or end of your rail journey with advance notice.

The locations listed below are where the train arrives and departs in each destination. Please refer to your final travel documents for Guest Centre locations and transfer details to the train stations or sidings, as not all locations below have public access. 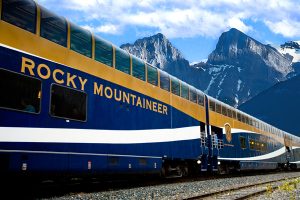